Peru: The Capital of an Amazing Ancient Culture

High in the valleys of the Andes visitors from around the world are able to explore the remains of the Inca civilization created in only 150 years. These amazing people worked between 1400 and 1535 when they were conquered by a few hundred Spanish conquistadors and their allies. Their extensive economic network became a civilization of over 9 million people in 150 communities stretching from Columbia to Chile.
Visitors fly into the capital of the Inca at Cusco, which sits in a high mountain valley, at an ear-popping 11,000 feet above sea level. If you have been to the top of the tram in Snow Bird in the mountains just east of Salt Lake you will have been that high.

monumental structures that they did. Today over a million people a year from all over the globe visit Peru to see the ruins of this ancient civilization. The Inca nation, “the Children of the Sun,” started as a small culture based in the central highlands. In the early 1400’s under the reign of Pachacutec, the Incas began one of the
most explosive expansions of culture ever recorded. The genius of the Inca was their ability to annex regions that could add knowledge or agricultural products that could expand their understanding of how to best use the resources and people they controlled. As a result, they quickly accumulated massive amounts of information more advanced than their own. They became outstanding teachers, astronomers, weavers, builders, architects, farmers, and gold artisans. The magnificent buildings erected during Pachacutec’s 95 year reign were the high point of Inca construction. Less than a hundred years after his death, the Inca civilization collapsed due to an on-going civil war and the arrival of the Spanish conquerors. 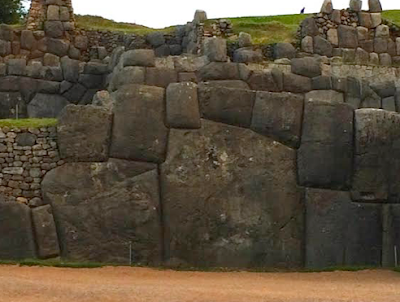 High on the plateau above Cusco lies the complex ruins of Saqsaywaman, one of the most famous Inca sites visitors see. The most amazing aspect of the ruins are the massive stones used to build the walls fitted so perfectly together that even a piece of paper won’t slip between them. The large stone in the photo weighs over three hundred tons and has eleven angles where adjacent stones have been smoothed to fit into the angles. Saqsaywaman was a complex of structures that served as protection for the main trail from the south to the Inca capital. Even today each solstice is marked with celebrations on the great plaza there. Our Qechua guide explained that it was also a place where knowledge such as astronomy could be taught. 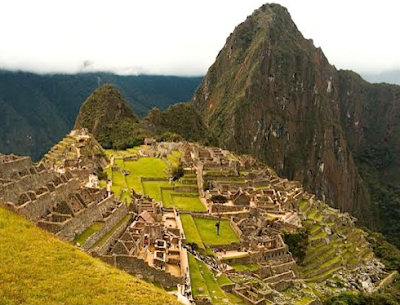 Most people have heard of Machu Picchu, but without a written language at the time, its Inca name was lost. Machu Picchu is actually the name of the mountain that can bee seen above the ruins. If you look closely, there are buildings at the top of the mountain as well. According to our guide, it was one of Pachacutec’s unfinished projects set high above the jungles along the Urubamba River. When Hiram Bingham found it in 1911, the ruins were so overgrown that it could hardly be seen. Visitors now can wander along the agricultural terraces and the roofless buildings that housed the four hundred people who lived there. Sadly, the nobles and the Inca royal family for whom it was built never resided there; it was never completed due to the civil war after Pachacutec’s death. Machu Picchu’s most important function appears to have been as an astronomy complex for observing the motions of the sun, moon, and stars. Sitting more than a thousand feet above the valley floor, visitors arrive by minibus, which climb the hair-raising switchbacks and single-lane track to the visitor center. This astonishing view awaits visitors from all over the world each year.

For and amazing video on Peru go to: