I never dreamed that I would hear those words from back stage on the NBC Tonight Show, but on June 4, 1975, that opportunity came.
I was in Philadelphia where I had just finished taping The Mike Douglas Show, when I received final word that I was going to appear with Johnny Carson. I called home with the great news! My father answered. I said, “Dad, guess what I am going to do next.” He responded, “Tell me.” “I am going to be on The Tonight Show with Johnny Carson. There was dead silence on the other end and then I heard him say, “Who is Johnny Carson?” Even though my father did not know who he was, my mother did and was very excited for me.
I arrived at the studio in Burbank California at 3 P.M. for the 5:30 taping. The staff worked with me to make sure that every detail was covered. The backdrop was a huge canvas with an outdoor scene painted on it. They even had a fire pit with hot coals ready for me to cook on.
As I stood waiting back stage, I heard Ed McMahon announce, “Hereeee’s Johnny!” The show was off and running. I was the first guest on that night. Right off the top I showed Johnny how to start a fire with two batteries and a fine grade of steel wool. I gave him the batteries and he put them together like they go into a flashlight. Then he placed the fine grade steel wool on the bottom and brushed it across the top of the batteries. The steel wool burst into flames. This ignited the next 17 minutes with idea after idea. 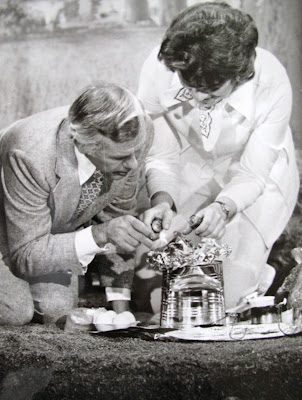 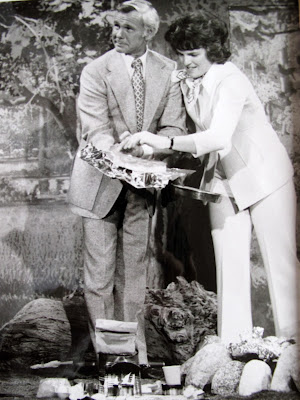 Carson shows the pineapple upside-down cake cooked in a box. 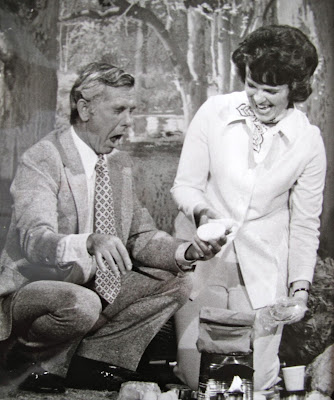 Onion burn Carson eyes as he makes meatloaf in an onion 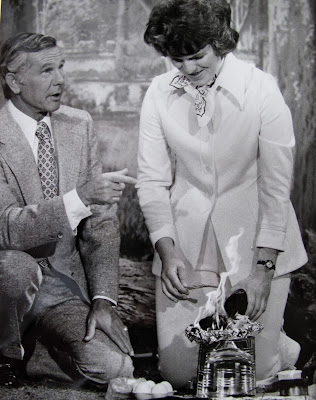 Dian lights a tuna can burner so Johnny can cook on the tin can stove. 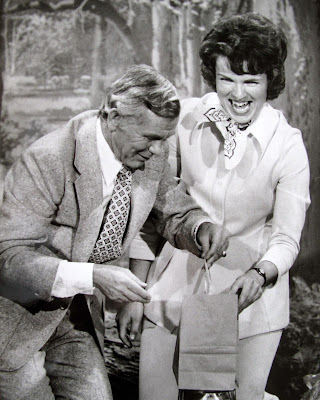 Johnny lines the bottom of a paper sack with bacon and then put an egg on top. 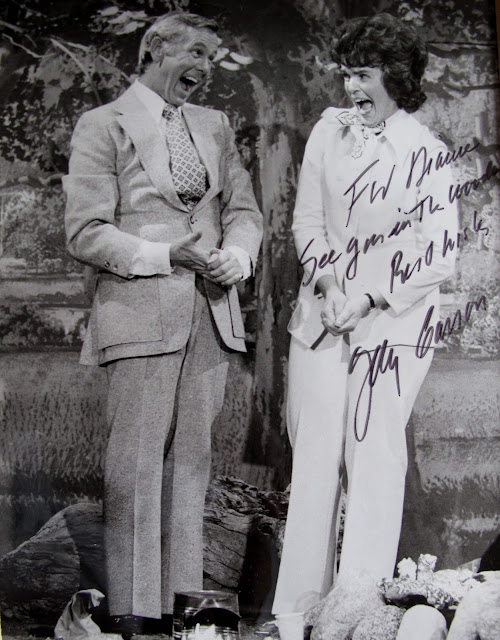 This picture, signed by carson himself, shows Dian reacting sympathetically after Johnny burns his hand on the paper sack that has cooked eggs and bacon.

I showed him how to cook eggs and bacon in a paper sack, how to boil water in a paper cup, how to cook meatloaf in an onion, and how to bake a cake in an orange. I also baked a pineapple upside-down cake in a box with a see-though oven bag wrap window over the top.
As the segment came to an end, Johnny reached down for the paper bag and put his hand on the bottom. He began jumping around on the stage saying words I cannot repeat. He then laughed and said, “Look at this!” He showed the audience the eggs and bacon, now cooked on the bottom of the bag.
When the segment ended he turned to me and said, “Great Job! I will go back and plug your book.” With an opportunity like this, my book Roughing it Easy took off and climbed quickly to the top of the New York Times Best Seller list, where it stayed all summer, only to be beat out by The Joy of Sex. I have said the only way that I can be number 1 again is to write a book called Sex in the Woods.
These seventeen minutes changed my life forever.